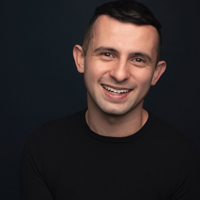 Juan De Anda is an expert in trend forecasting and editorial content, specializing in paid and organic social media. Having an educational background in print and online journalism, his editorial career focused upon finding the element of human interest that not only elicit reactions with audiences but generate a genuine connection amongst readers to stories, viewers to content, and consumers to brands.

He has been an integral part of building the social team and capacities at Orcí—acting as a resource of investigative research and intuitive insight. He has led efforts in content development, influencer identification, branded content, audience gauging, experiential activations, and post-campaign reporting. His experience in diversity and inclusion has helped major brands maintain a presence in the U.S. Hispanic and LGBTQ communities.

Juan has worked in many capacities at publications as a cultural correspondent with SF Weekly, Arts and Culture editor with digital news startup SFBay, and as a reporter and translator for California’s longest-running Spanish-English publication El Tecolote.

Prior to Orcí, Juan served as first-class liaison with Australian airline Qantas and flew around the world with the goal of traveling to 30 countries before turning 30.

Panel: How Brands and Creators Can Be Tapping into Emerging Channels for Their Influencer Marketing Campaign