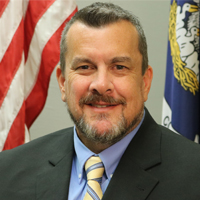 Mike Steele is the Communications Director for the Louisiana Governor's Office of Homeland Security & Emergency Preparedness or GOHSEP.  He serves as Joint Information Center (JIC) manager and the lead for the state’s Emergency Support Function 15 (Public Information.)

Steele supplies public information regarding agency actions and emergency events.  That work includes coordinating information for the Louisiana governor’s office as part of response and recovery.  Steele is responsible for GOHSEP's social media imprint and handles community education on emergency preparedness. That involves public appearances at everything from industry workshops and conferences to school events and group tours of the state emergency operations center.  In 2017, Mike helped GOHSEP launch the Get A Game Plan podcast as an additional tool in reaching and educating the public.

Steele has served the state during disasters such as the 2016 Louisiana flood events, Hurricane Harvey and several smaller-scale emergencies.  He was also deployed to North Carolina in 2018 as that region was impacted by Hurricane Florence to support the JIC and served as JIC manager during part of his time there. He deployed to Alaska in the spring of 2019 to help with public information related to the November 2018 earthquake recovery efforts.

Before GOHSEP, Steele had an extensive media career.  He has worked in several media markets across the state including Baton Rouge, Lafayette, and Alexandria.  During his time as a journalist, he received numerous Associated Press awards including Reporter of the Year.

Steele is a graduate of Southern University in Baton Rouge with a degree in Mass Communications. Mike is a father of four. His wife Lori is a public outreach coordinator for the Louisiana Organ Procurement Agency (LOPA) and a part-time, public information officer for the Livingston Parish Sheriff’s Office.

Panel: Working as a One-Person Social Media and Comms Team — Strategies for PIOs to Make the Most of Limited Resources