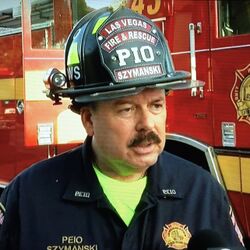 Timothy R Szymanski is the Fire Public Education & Information Officer for Las Vegas Fire & Rescue in Las Vegas, Nevada.  He is an Advanced Public Information Officer trained at the Emergency Management Institute in Emmitsburg, Maryland, Public Information Officer Instructor for the State of Nevada Department of Public Safety, and a Master Fire Service Instructor.  He has been in the fire service for the past 50 years working in the Cleveland metro area, Atlanta metro area, and Las Vegas for the past 25 years. Nearly 40 of those years as a PIO. He was the Fire & Emergency PIO for the 1996 Centennial Olympics in Atlanta.

He has received several national and local awards for his work as PIO including being inducted into the Nevada Broadcasters Hall of Fame.  He is a writer for Firehouse magazine including his Fire Service PIO column.

Leveraging the Power of Social Media during a Critical Incident

It’s not your everyday incident, maybe it affects an entire community or a single person; wildfire, mass casualties, active shooter, a child trapped in a mine, or some other catastrophe and it is getting a lot of attention.  It is what we call “the big one.” The one call you have been dreading but knew could happen at any time.  Are you ready?

After working with the media as a Public Information Officer for nearly 40 years, I have come to learn that Social Media is a vital asset in getting information out and quickly both to the media and the general public. It can be a useful tool, or it can be a nightmare.  It’s all in the way you use it and which platform you use.

I have worked at several significant incidents, some of which drew national media attention.  Each time my job got a little easier because of the advances of social media.  The key was knowing how to use it, being prepared, and practicing what to do so when the time came.

In this course I will cover: