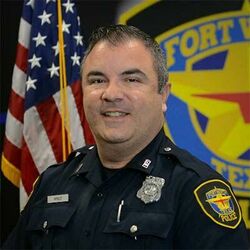 Officer Brad Perez has been with the Fort Worth Police Department for 17 years.  As a hobby, Brad began making videos for the department and the Chief took notice and asked Brad to join the Public Relations Office back in December 2015 to help with recruitment.

Brad has spoken and shared his winning formula at Major City Chiefs Association, Government Social Media Conference and Insight Exchange Network explaining how you don't have to spend a lot of money to successfully recruit.

For years, the Fort Worth Police Department was able to stand out as one of the only police departments that was continuing to find recruits and stay staffed at max capacity while other departments nationally were struggling.  This was done by being a department that not only appealed to the people in the real world, but also appealed to those in the social media world.  And in this day and age, social media is where most people get their news and form their opinions about the police profession.  2020 was a year unlike any other, but the Fort Worth Police Department was still able to obtain recruits and push out graduating classes.  This course will share with you our winning recruitment formulas before, during and after 2020, through the good times and the bad.