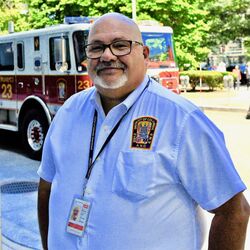 Vito Maggiolo is the Public Information Officer for the DC Fire and EMS Department. His primary focus is handling the daily social media messaging on both Twitter and Facebook.

In doing so, he responds to all incident scenes of note, obtaining critical information and images so the community can be updated and the media notified of newsworthy events. At the same time, he will interface with other city agencies and stakeholders to assist them with information gathering.

He is on call 24/7 to also respond to media inquiries or any other questions from community members.

Maggiolo also seeks out other agency activities to capture images that show the community at large our commitment to their safety and well being, such as training activities. He also pushes out social media safety messages to enhance community awareness of such issues as smoke alarms, heating safety precautions, and a number of other issues.

He is a life long student of the fire service. As a journalist, he spent 35 years working for the Cable News Network, during which time he received two Emmys for International coverage, as well as other awards.