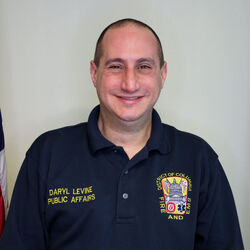 Daryl R. Levine currently serves as a Public Affairs Specialist for the DC Fire and Emergency Medical Services Department. In this role, he works diligently with internal and external stakeholders to establish and maintain long-term positive relationships with the media and community. Daryl previously served as a Special Assistant with the Executive Office of the Mayor of the District of Columbia where he advanced Mayoral appearances, coordinated bi-weekly mayoral press briefings, and served as a liaison with the Mayor's Special Events Task Group. Daryl has lived in the District of Columbia for the last 16 years and is active in many community and non-profit organizations where he lends his time to helping to make DC a better place to live, work, and play for everyone.