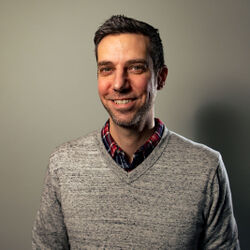 Mike Mueller manages all digital content for the U.S. Department of Energy’s Office of Nuclear Energy. He is responsible for the office’s digital content strategy, content creation, and video production. Mike launched the office’s Facebook, Twitter, and LinkedIn pages in 2018 and 2019. Since then, he has leveraged these platforms to increase web traffic from 20,000 to more than 215,000 average pageviews per month. Before working in the Office of Nuclear Energy, Mike supported the Department’s Office of Energy Efficiency and Renewable Energy where he launched and managed the office’s in-house video production efforts and tripled its average monthly pageviews for its blog. Prior to DOE, Mike spent six years as a sports broadcaster in Pennsylvania and Virginia and also spent four years as a special educator in the DC Public School system before returning to communications. Mike graduated from Syracuse University’s S.I. Newhouse School of Public Communications in 2004 and also holds an Advanced Social Media Strategy Certificate from the school in partnership with HootSuite Media Inc.

Are you starting a new social media platform from scratch? It’s important to have a plan. Learn how the Office of Nuclear Energy launched and successfully grew its Facebook, Twitter, and LinkedIn platforms into some of the highest-performing channels at the U.S. Department of Energy in just four years.

Mike Mueller will guide you through every step from pre-launch and approval processes to promoting and optimizing your content to ensure success.