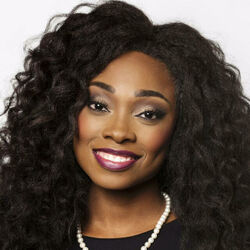 April serves as the Social Media Specialist for the City of Kansas City, Missouri (KCMO), where she manages the City's social media pages and oversees campaigns for over 17 departments. Kansas City's social media presence includes Facebook (Meta), Instagram, LinkedIn, Twitter, and Nextdoor. She trains city employees on social media management. Most recently, she live-streamed POTUS in Kansas City regarding the latest Infrastructure bill passed to "Build Back Better" and won an award for the 2022 KCMO City Hall Selfie Day content.

Previously, April worked with NBC Universal, BET, and Telepictures. She has also served as a Publicist for a celebrity public relations firm, a social media manager for a nonprofit organization, and a communications director for a fashion organization. She brings eight years of social media experience and 12+ years of experience in communications to her work, as well as a master's in communications and a bachelor's degree in political science with a minor in Africana Studies. April is a leader with an authoritative voice in the social media community. April has been invited as a guest speaker for the International Social Media Club, RAPIO, Global ties (twice), Ragan Communications/PR Daily's "Speech Writing & Public Affairs conference," and their 2022 "Social Media Conference" at Walt Disney World.

April not only curates' assets but also develops and produces content. Whether she is setting a concept, filming an event or project, editing video segments, or creating graphics, April jumps in wherever needed to ensure campaigns are complete. Occasionally, April can be seen on the City's govt channel as a host for the weekly report. She has also lent her image as a model to reproduce the famous "Kansas City Spirit" image used for the recent City's Budget Proposal and the Comprehensive Plan, "The KC Playbook." The team project was successful, and the graphic developed using her likeness is now a fixture in the Kansas City Museum. You can also find her image on several Hallmark cards and products.

Panel: A Framework for Building Your Brand Voice & Tone - Finding Your Agency's Balance Between Fun, Professional, and Authentic

Panelists will share their experiences building unique brand voices, what they’ve learned along the way, and what attending agencies should consider as they build their own brand online.