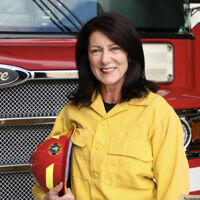 An Emmy award-winning storyteller, Ronda Scholting has more than 20 years experience in television news- as a reporter, producer, and anchor. She worked for local TV stations and freelanced for several networks- CNN, FOX, CBS, and ABC.

She has a decade of experience in the corporate world as a public relations manager.

Ronda is now the public information officer for West Metro Fire Rescue, headquartered in Lakewood, Colorado. She is also a PIO on a Type 2 Incident Management Team (IMT) that deploys to wildland fires and other large-scale incidents across the country.

Her social media posts and videos have been viewed and shared by millions across several social media platforms. Her video can be seen on local, national and international newscasts and news websites.

In 2019, Ronda generated more than $30 million in earned media ad value for West Metro, with an audience of more than 1.3 billion.

Even if you only have a smartphone, you can create great video for social media. Ronda Scholting, PIO for West Metro Fire Rescue (Colorado) has some tips on the tools and techniques to help you gain more followers and engagement.