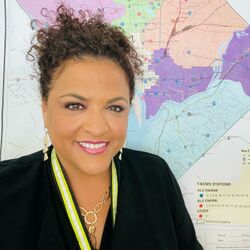 Jennifer Donelan is a twenty-year veteran Emmy award-winning broadcast journalist who worked locally in Baton Rouge, Detroit and Washington DC media markets and as a National Correspondent for CBS affiliates. Throughout her career, her primary area of reporting was focused on matters of public safety. In 2016, she became the Director of the Media Relations Division for Prince George’s County Police in Maryland, one of the top thirty largest police departments in the United States. She expanded her work in public safety communications in 2020 when she took over as Director of Public Information for the Prince George’s County Maryland Fire/Emergency Medical Services (EMS) Department. In August of 2021, she joined the DC Fire and EMS Department as the agency’s Chief Communications Officer. Currently, Ms. Donelan serves on the board of Special Olympics Maryland, she is a member of the Links, Incorporated‘s National Heart Links and Walk For Healthy Living Committee. She is the host of the United States Department of Justice Community Oriented Policing Services (COPS) podcast, “The Beat”.  Donelan is also the proud recipient of a Woman’s Day magazine Red Dress Award for her contributions in women’s heart health advocacy. This year, she received the  “Best Social Media Video” award from the International Association of Fire Fighters which represents more than 325,000 career Fire fighters and paramedics across the United States and Canada.