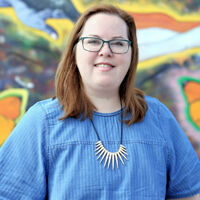 Sophie McNeil Wolf, Digital Media Manager for Mississippi Institutions for Higher Learning, loves the intersection of community, storytelling and learning, which has informed much of her work. In fact, as a child, she was pegged as the “first to know it and the first to tell it.” She holds a bachelor of liberal arts in journalism from the University of Southern Mississippi. For the last 15 years, Wolf has worked in various facets of media, from newspapers to magazines to PR departments and has been on the ground floor of social media's rise. She has previously worked for organizations such as Visit Jackson and Millsaps College and has done freelance media work in Mississippi and nationally. For the last seven years, she has also worked as the editor/co-owner of Find It In Fondren and Explore LeFleur, two popular local media brands highlighting areas of Jackson, Mississippi.

Keynote: Working Together Works: How to Stop, Collaborate, and Listen with Colleagues Across Your Organization

Do you feel like departments and units at your university are working in silos? Is communication stymied between colleagues and your system communications office? It doesn’t have to be this way. Sophie Wolf, Digital Media Manager for Mississippi Institutions of Higher Learning – the four-year public university system of the Magnolia State, will break down walls and discuss collaboration from the perspective of someone who has worked as a one-person marketing jack-of-all-trades at a small liberal arts college and now as a higher ed system communications officer. How do news release topics get decided? Why do announcements about personnel matters seem last minute? How can universities more closely align and get our messages out through the system? Get prepared to get connected and energized to advance your work together.

Attendees will walk away from this session: