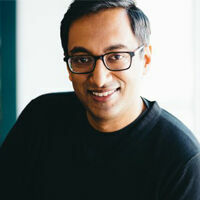 Apu Gupta is the co-founder and CEO of Curalate, the leading Social Commerce company with offices in Philadelphia, New York, Seattle, and London. Prior to launching Curalate, Apu was COO & CMO at MedPlus Health Services. Under his leadership, MedPlus raised $25MM in venture funding and became the second-largest pharmacy chain in India. Apu was also an early employee of WebEx from its Series A through IPO. Apu holds an undergraduate degree from the University of Texas, Austin and an MBA from the Wharton School of Business. Apu has been recognized as an E&Y Entrepreneur of the Year in the Emerging Entrepreneur category and is a Fellow in the Aspen Institute’s Henry Crown Fellowship program.

Instagram has played a crucial role in the growth of S’well. In addition to S’well posting on Instagram itself, S’well customers often post pictures of their S’well bottle in their personal Instagram feeds. As a result, the brand has more than 261,000 Instagram followers. What really moved the needle for S’well however was when the brand integrated its Instagram presence with its e-commerce site. Now, S’well’s Instagram gallery takes users right to the product page of its website, making Instagram a revenue-driver, and user-generated photos of S’well bottles are highlighted on the brand’s site into addition to its social properties. S'well has seen an 8x in conversions and 4x increase in time on site from visitors interacting with user-generated content.

In this session, Apu and Josh will discuss:
• How to identify and leverage social influencers – especially micro-influencers (those with smaller followings)
• How to fully leverage user-generated on platforms like Instagram to a brand’s website to email
• How image-based marketing is helping consumers discover new products