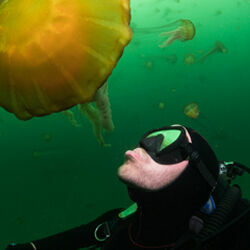 Patrick Webster is a marine science communicator and digital artist based out of Monterey Bay, California. His love for the ocean was sparked by visiting the Monterey Bay Aquarium's sea otters when he was five years old, and he has worked and volunteered at the Aquarium now for over 11 years. He grew up in France and in Sweden before earning his Bachelor’s of Science in Marine Biology at UC Santa Cruz in 2011 while studying red abalone and Mediterranean cardinalfishes. Using the computer skills he learned making skiing videos with his high school friends, he's been bringing the Aquarium to digital visitors on social media platforms for the last 6 years through livestreams, memes and hashtag puns—all to build an engaged digital audience to help the Aquarium's mission of inspiring conservation of the ocean. In his off time, he’s an avid underwater photographer and scientific diver exploring the kelp forests and cold water critters of Central California, with a penchant for homemade pizza.