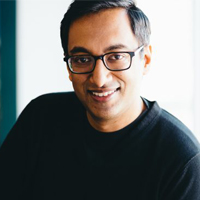 Apu Gupta is the co-founder and CEO of Curalate, the leading Social Commerce company with offices in Philadelphia, New York, Seattle, and London. Prior to launching Curalate, Apu was COO & CMO at MedPlus Health Services. Under his leadership, MedPlus raised $25MM in venture funding and became the second-largest pharmacy chain in India. Apu was also an early employee of WebEx from its Series A through IPO. Apu holds an undergraduate degree from the University of Texas, Austin and an MBA from the Wharton School of Business. Apu has been recognized as an E&Y Entrepreneur of the Year in the Emerging Entrepreneur category and is a Fellow in the Aspen Institute’s Henry Crown Fellowship program.