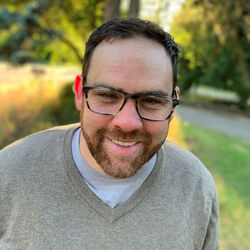 My career began by developing content engagement strategies for English First, a global corporation with an online language learning product. This experience was my film school, and I learned how to pull people into a good story to build meaningful connections. I worked globally for over a decade in brand journalism with companies like Siemens, Disney, and Procter & Gamble. My narrative films have premiered at the Hong Kong Film Festival, Antwerp Museum of Cinematography, Worldfest Houston Film Festival, and Idyllwild Festival of Cinema in California. I am currently focused on storytelling for public service in Washington state. I like to think that stories are built in today’s digital world. I see myself as a story architect creating authentic narrative threads that reveal meaningful insights into subjects that positively impact our communities.

Zac received his Master of Communication in Digital Media from the University of Washington and a B.S. in Industrial Design from Art Center College of Design in Pasadena, CA.

How to Create Great Video Content for Social Media

Creating compelling and authentic stories is top of mind for most communications professionals in government agencies. Creating deeply engaging content—connecting your audience in a meaningful way to programs and services—is a powerful approach to your social media strategy.

In this session, you’ll learn how to build trust in the process of video production. We’ll break down key parts of video campaign projects produced for the Office of Superintendent of Public Instruction. Throughout the session, we’ll cover filming tactics employed in various situations, such as events or situations requiring a sensitive approach. We’ll cover the entire process from preparation, production, and finalizing the project with contributor support throughout the project pipeline. When you produce content with your community, you’ll find that they will also help you share the story when it’s ready for publishing.