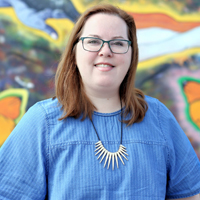 Sophie McNeil Wolf, Digital Media Manager for Mississippi Institutions for Higher Learning, loves the intersection of community, storytelling and learning, which has informed much of her work. In fact, as a child, she was pegged as the “first to know it and the first to tell it.” She holds a bachelor of liberal arts in journalism from the University of Southern Mississippi. For the last 15 years, Wolf has worked in various facets of media, from newspapers to magazines to PR departments and has been on the ground floor of social media's rise. She has previously worked for organizations such as Visit Jackson and Millsaps College and has done freelance media work in Mississippi and nationally. For the last seven years, she has also worked as the editor/co-owner of Find It In Fondren and Explore LeFleur, two popular local media brands highlighting areas of Jackson, Mississippi.